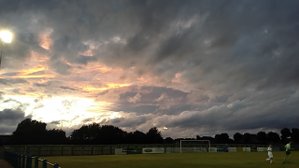 Miners lose out to NPL visitors....

In this first pre-season friendly The Miners entertained Northern Premier League side Scarborough Athletic. Whilst Town have faced the defunct Scarborough FC in the past (their reserve side competing in the NCEL in the early 1980s), this is the first meeting with the club that rose from the former football league outfit’s ashes in 2007.

The Seadogs, managed by former Garforth teammates Darren Kelly and David Brown, finished 8th last season in the Northern Premier League Premier Division and like ourselves are playing their first friendly game of pre-season.

In a half in which Scarborough were the better side, Nathan Cartman gave them the lead on 12 mins after beating the last man and finding the net from 35 yards. The lead was doubled only a couple of minutes later when Michael Coulson scored from close range after Town keeper Toby Wells had made a triple save. There was some misfortune for the visitors on 21 mins when Kieran Weledj went down injured and had to be helped from the field. The Miners came into the game towards the end of the half, but the closest we came was a Jack Lazenby free-kick on 24 mins which went just wide.

A number of changes for both sides were made at half time, and Town did better against their higher-division opponents. On 55 mins half-time substitute Dramane Coulibaly drew a save from Trennery when supplied by Charlie Marshall. Paul Marshall's side were perhaps unfortunate to concede again when they did, but in fairness it was a fine strike into the top corner from Brandon Smalley that gave the visitors their third on 63 mins. Only two minutes later though we had one back when Joe Colley put through Coulibaly to finish low across the keeper.

Wells produced a good save shortly after to deny Piteu Crouz (?), then down the other end five minutes from time there was almost a rare goal for Helmo Silva when his backheel from a left wing cross was kept out.

Garforth are next in action tomorrow evening when we make the short journey to Tadcaster Magnets (kick-off 6:45pm).