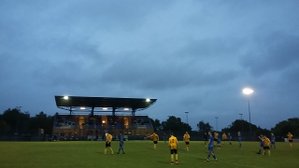 Colley and Leach on target as Miners hold NPL opponents in an entertaining return to spectator football.

Former Garforth goalkeeper Craig Parry brought his Worksop side to the Bannister Prentice Stadium looking to continue their unbeaten pre-season after moving from Pontefract Collieries in July. With competitive football starting eleven days earlier for The Miners, manager Paul Marshall meanwhile sought to start finalising his team ahead of the big kick-off against Whitley Bay next Tuesday. The last meeting here between the two sides came on 9th February last year when The Tigers came away 2-1 winners on their route to promotion from the NCEL, Dan Williams with our consolation.

Our visitors created most of the chances first half, and were ahead only three minutes in. New signing Karl Fitzgerald headed an effort off the line, but with teammates unable to clear their lines, the ball came to James Baxendale who dinked the ball over Toby Wells and into the net. Wells did well to deny danger man Michael Dunn on 12 mins, then Aaron Sennett-Nielson (?) hit just wide at the near post from Dunn's cross.

On 21 mins Jack Lazenby and Gavin Allott were both cautioned after an altercation caused by Lazenby's poor challenge on an opponent. Garforth did manage a couple of chances towards the end of the half; Joe Colley's towering header was caught by Tigers goalkeeper Sebastian Malkowski from Lazenby's free-kick, then Dan Coupland fired just wide from another Lazenby set-piece.

Into the second half and Allott's turn and shot was just wide as the visitors looked to increase their lead, but instead there was a shot in the arm for The Miners on 48 mins when we found an equalizer. Some good play down the left ended in Colley making his way inside and beating Malkowski from a narrow angle. A fourth goal in pre-season for the young midfielder who is making a strong case for his place in the first eleven.

Wells made a good stop to keep out Dunn from restoring his side's lead when he got clear on 55 mins, then down the other end substitute Lee Turner forced a save at the near post. There followed a couple more Worksop chances as Wells saved a header from Jack Broadhead, then Allott could only head over the bar from a good position when meeting Dunn's cross.

The Miners gave themselves the lead however on 78 mins when George Brown set up Sam Leach to score his second goal for the club with a superb curling strike in off the crossbar. Sadly the lead couldn't last, as The Tigers had the last word in pretty much the last kick of the game. Dunn and Allott combined again for the latter to find the net with a thumping header.

Credit to both teams who shook off the driving wind and rain to serve up an entertaining evening for those who ventured out, particularly Garforth supporters who watched their team for the first time since March.