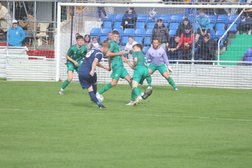 Garforth out of the FA Vase

Two second half goals secured a win for Thornaby against a Garforth side that had played with ten men since the 23rd minute.

Toby Wells was red carded after his defence had gone awol, leaving him to try to challenge an on rushing attacker, but bringing him down and leaving the ref with no other option than to send him off.

Sam Denton took over in goal and did well to keep the oppostion at bay, but it was Garforth that carved out most chances in the game.

The opener came in the 63rd minute from Joe Pickett via a big deflection.
Either team could have scored the next goal, but Thornabys' Steve Roberts beat the offside trap and lifted the ball over Denton to end the contest on 86 minutes.

There was still time for another bit of drama, when Thornaby had a player sent off in the closing stages.