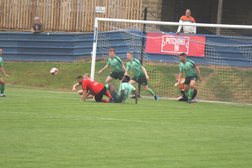 Miners lose out on Yorkshire Trophy as Campion come from behind to win.

The Miners ended their pre-season in defeat as they were deservedly beaten by Division 1 opponents Campion.

With key players to replace - two of which - Joe Colley and Karl Fitzgerald - lined up for the Red & Blacks after making the move to Bradford a few weeks ago, manager Paul Marshall used this last opportunity to put some more triallists through their paces.

In an entertaining first half James Burgess' cross forced Campion's number 3 to clear the ball onto his own crossbar, then shortly after Campion's number 9 forced a good stop from Toby Wells, turning his shot wide. From the resulting corner Town's defence denied Sean Hunter on the line, another ex-Town face.

On 19 mins Garforth went ahead following a defensive error. Burgess chased down a defender's header back to his 'keeper and was duly rewarded when the 'keeper's clearance ricocheted off him and into the net. There followed a good spell as we went in search of a second. Charlie Marshall went close with a shot just wide when Burgess played him in on the edge of the box, then Lee Turner hit wide from a triallist's free-kick.

The second half was a disappointing one for The Miners who for long periods never really looked like adding to their lead. There was one good chance when Matt Ancliff cut in from the right and fired against the foot of the post, but other than that it was mostly Campion. Four minutes into the second half they had their equaliser and sure enough it was one of our departed players who found it - Joe Colley heading home a corner kick. Garforth man-of-the-match Wells made a stop with his feet to keep out Campion's number 8, then turned wide at the near post from their number 10. Seven minutes from time the Bradford side took the lead. After Wells pushed wide another shot from number 10, the ball was played to number 15 who fired into the far corner. Campion's number 9 almost made it three late on after the ball was given away, but Wells was there again.

Congratulations to Campion on winning the trophy, and doing so with a 100% record. A disappointing end to pre-season for The Miners meanwhile, but the fact we made the final of a tournament where we've mostly acquitted ourselves well gives hope for the new league season rapidly approaching. Hemsworth are the visitors to LS25 in the big kick-off next Friday (kick-off 7:45pm).