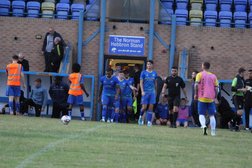 Garforth had to share the points with a resilient Hemsworth side, who twice came from behind in a thrilling league opener at the Bannister Prentice Stadium.

A crowd of 307 were entertained as Charlie Marshall got off the mark for the new campaign with both goals for Town.

Marshall opened the scoring when he prodded home a dinked ball by James Burgess.
Hemsworth were soon level when for Garforth striker Jay Davis took everyone by surprise and unleashed an earl shot from 20 yards that crept inside the near post.

Marshall put Garforth back ahead in the second half when he was quickest to react to a loose ball following a cross by Omosebi.
Again, Hemsworth clawed level when Andy Horbury slotted home from closs range to complete a nice passing move.

Hemsworth keeper made important saves to deny Burgess and Dan Coupland to ensure the vistors left with a share of the points.