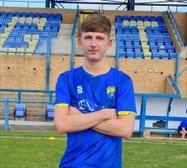 More typical late drama from Garforth earned a good away point at Hallam.

James burgess got Garforth off to a flying start with a goal in the third minute, but an unfortunate Dexter Ball own goal soon levelled things up.
The home side then went in front when former Garforth player Liam Royles stepped up to convert a penalty.

Hallam were had a player sent off and had to endure late pressure from The Miners. Pressure that eventually told when fittingly, Dexter Ball struck six minutes into added time to leave the Sheffield side stunned.

Jamie Barkway was red carded late on for Garforth, but it didn't dampen the spirits of those that had made the trip.