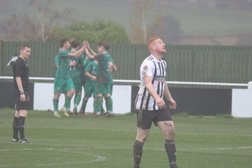 PCFC 0 Garforth Town 4
Attendance 286
The teams came into this match with contrasting form. Garforth were top of the form table with the best attack in the NCELP. They were also on a run of 10 games unbeaten, Church had lost 3 successive matches in all competitions. So this match was a chance for Church to return to winning ways, but with several imposed changes Church had an unusual look.

Church pressed high from outset but on a couple of occasions failed to stop Garforth from passing out.
Goal 4 minutes. A dinked pass in midfield saw Tom Brennan outpaced by James Burgess. He shot low to the left of goal beating the on-rushing Chris Snaith.
PCFC 0 Garforth 1

Church responded with a neat passing move of their own, Cameron Simpson drew a good save from his shot on the left edge of the 6-yard box. Church and Garforth exchanged opportunities but Garforth had slightly the better of the chances. Cameron Simpson's pace caused problems and he again caused a scramble in the Garforth defence but Church could not finish their chance. They found some space when Tom Charlesworth beat his man on the right, but Wayne Hughes was well marshalled in front of goal and Garforth cleared. Church showed promise and for 15 minutes stretched Garforth.

Half time PCFC 0 Garforth 1
Church kicked off into the breeze and looked good going forward. James Young met a deep cross but his header went wide.

Goal 47 minutes. Garforth made light work of moving the football with a series of one-touch passes. Church tried to close in on the ball but Garforth found a man on the right of the box. Dan Coupland finished low to the left of the goal.
PCFC 0 Garforth 2

Goal 54 minutes. Again, Church were outmaneuvred this time on the right side. James Burgess hammered the ball high into the top right of the goal.
PCFC 0 Garforth 3

Goal 57 minutes. Garforth again weaved their way through the Church defence with some neat passing. Sam Barker took the ball and his first touch beat the defenders. His shot deflected over the despairing Snaith to land in the middle of the goal.
PCFC 0 Garforth 4

Chris Snaith then pulled off a good save low to his right. Church refused to give up and Reece High who came on for Wayne Hughes provided pace up front. Church almost conceded from their own corner when Garforth broke and drew another good save from Snaith in the Church goal.
Ashley Ellis replaced Charles Shepherd. Leon Hurles-Brook replaced Jordan Coduri and Maasai Dearlove replaced Cameron Simpson.
Church went down to 10 men when Ashley Ellis picked up an injury after 5 minutes and was carried from the pitch. Church continued to work hard, but Garforth managed the match well.

A rather disjointed performance from Church with several players playing out of position. However, on the balance of play they did not look like they would lose by such a big margin. Garforth looked well drilled and they played some lovely football in the build up to their goals.