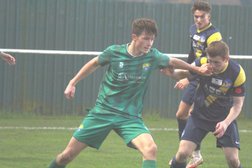 Garforth earned a hard fought draw at Bottesford, but a tight offside call denied them all three points.

Bottesford stunned the the small crowd that had turned out when Joe Simpson gave them the lead through a spectacular dipping volley in the second minute.
The lead could have been doubled when a similar effort looped over Toby Wells and hit the foot of the far post.
It was a rare moment of quality in a scrappy first period that saw Garforth forced into two changes.
Sam Leach replaced Danny Gibbons early on and Rinor Ejupi came on for Matt Antcliff late in the half.

Garforth must have heeded a half time rocket from Paul Marshall, as they were a transformed team after the break.
James Burgess carved out a chance for himself that was turned away for a corner. Jamie Barkway rose well to head the corner kick down, but at the keeper.

Charlie Marshall levelled the scores on fifty minutes when he reacted quickly to a loose ball, hitting it low through a crowd of players and into the bottom corner.

A fine block by a Bottesford defender took an Ejupi shot away from goal at the last moment. When the resulting corner was cleared as far as Rinor, he picked out the run of Dan Coupland, who passed the ball into then net from a couple of yards out.
The replay shows Coupland onside, but the home side will see it as justice, as the corner kick appeared to have curled out and back into play.

Liam Woods also had a header blocked by a defender, as the Miners continued to press for the winner.
Bottesford had a couple of chances on the break, a header flashed just wide of Wells far post and a shot from close range flew inches over, although Toby may have given it a helping fingertip.

The last chance fell to Marshall deep into added time, when he twisted and turned to shake off two markers, but his effort was high over the bar.