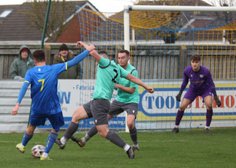 Goals from Thompson, Burgess and Ball got Town back to winning ways against visiting Frickley in an entertaining game.

Sam Leach replaced the injured Callum Brown at left back, allowing Daniel Omosebi to make his first start since his own enforced spell on the sidelines. Nick Thompson was drafted into holding midfield to replace Dexter Ball with Rinor Ejupi replacing him.

Garforth enjoyed the better of the chances in the early part of the game. Sam Barker almost put the Miners ahead only two minutes in when supplied by Nick Thompson, seeing a good strike tipped over the bar by Frickley ‘keeper Charlie Preston. The diminutive midfielder then put a low shot wide after Dan Coupland’s effort was blocked. James Burgess had a couple of chances of his own after combining with Barker; he was denied by Preston at the near post, then the rebound was against the side netting.

The first sight of goal for the visitors came on 14 mins when captain Richard Collier’s 20 yard effort was turned wide by Toby Wells. Three minutes later however The Miners opened the scoring with a superb bit of play. Thompson grabbed his third goal in as many games, sidefooting into the net after a flowing move in from the left, Marshall with the assist.

Our lead was to last only three minutes however. Collier’s shot from the edge of the box was blocked in the six-yard box, the loose ball going straight to an awaiting Elliott Owen who turned in at close range.

The rest of the half was pretty even with both sides creating chances. On 21 mins Town had the ball in the net when Coupland’s cross was dropped by Preston, but the referee deemed him to have been impeded and gave a free kick. Burgess brought a good save from Preston after getting on the end of Barker’s ball forward and turning his man. Down the other end Wells made a great stop to deny Lloyd Smith after he got the better of a Town defender.

Into the second half and Wells was there again to keep the scores level when doing well to keep out Wade Ripley after he’d been played in by Smith's clever backheel. There followed a great chance for Marshall when released down the left wing, but he could only shoot well wide.

On 59 mins Garforth went ahead once more. From Coupland's free kick, Jamie Barkway's header found Burgess who with his back to goal, hooked the ball beyond Preston into the net. It’s been a frustrating few weeks for our top scorer who scores for the first time in four matches, but we’re yet to lose this season when he does. On 68 mins it was 3-1. A Town corner kick was cleared only as far as substitute Dexter Ball 30 yards out who unleashed a powerful strike which Preston got a hand to but couldn’t keep it out. A second goal of the season for the young midfielder.

With chances few and far between now for The Blues, Town went in search of further goals. Marshall brought a good stop from Preston who turned wide his effort from just outside the box. Burgess too came close with six minutes left after beating the offside trap, but his shot went just beyond the far post. A second goal for our number nine wouldn’t come as he unusually stepped up for a free-kick 20 yards out, this was deflected wide.

Frickley made things uncomfortable in injury time when they were awarded a free kick of their own. Ben Ellison-Tope played the ball to Kofi Appiah in space who scored with an unstoppable strike into the top corner. In the end however, they’d left it too late for a comeback and Town could celebrate a first ever home win against their opponents.

Paul Marshall's side are in League Cup 3rd round action on Tuesday when we host Barton Town (kick-off 7:45pm).