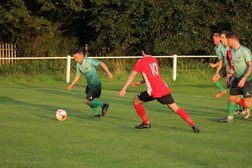 An early goal from Mark Simpson earned The Miners a point against a good Knaresborough side in an entertaining evening at Manse Lane.

In Garforth's ever changing centre-back pairing, Lee Turner returned to replace Dan Coupland, whilst midfielder Kane Bingley lined up on the bench after serving a three-game ban.

Attacking-wise, this wasn't quite up to the high standards of previous games, but that's not to say a battling Town didn't create chances. Sean Hunter put a low strike into the side netting when put through only two minutes in. On six minutes however, we went ahead with another early goal. Some good play by Adam Priestley and Hunter through the middle played in Mark Simpson who turned and finished well past Sam Lee in the Knaresborough goal. On 16 mins Adam Porritt went close with a 40 yard effort onto the roof of the net when Lee's kick-out landed at his feet, before Hunter raced clear but could only direct his shot straight at Lee.

From then on it was Knaresborough with most of the play. Luke Harrop put a low strike just wide on 24 mins after an attack down the right, then Will Lenehen headed narrowly over the crossbar when getting on the end of Brad Walker's corner kick. There was then a chance for Adam Baker on 36 mins, his volley going wide of the far post.

Simpson went close down the other end moments later when played in by Joe Colley, but his resulting shot was saved. Toby Wells pulled off a brilliant stop on the 45 min-mark, pushing clear Harrop's header.

Wells came to Town's rescue again on 52 mins when denying a Walker effort. There were shouts for a Knaresborough penalty on 61 mins when substitute Josh Garbutt went down, but these were quickly waved away by referee Jamie Walters. Three minutes later the home side deservedly drew themselves level when a free-kick was played to Harrop who fired into the top corner.

The Miners needed fresh legs against a home side eager to record their first win of the season. Dan Williams and Kane Bingley - both making their first competitive starts of the season - provided them on 69 minutes, replacing Porritt and Hunter.

The remaining twenty one mins were more end-to-end, and either side could have nicked it. Ben Parkes's diving header from Jack Powis' delivery was just wide of the upright, then Simpson had the ball in the net after some good play down the right but was flagged offside. Knaresborough's Walker was unlucky when seeing his shot strike the crossbar, before sub Curtly Martin-Wyatt headed over the bar when getting on the end of a Danny Buttle delivery. The final chance fell to Priestley who headed wide from another Buttle cross.

A good away point for Rob Hunter's side who go into a break from league action 2nd in the table after three games. Action elsewhere may change that one, but the lads can be very proud of the start to the season. We're back in FA Cup action this Saturday when BetVictor League side Colne are the visitors (kick-off 3pm).