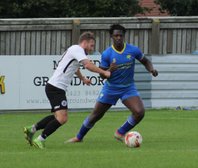 The visitors showed why they were the leagues' form team from early in the match, forcing Wells into a flying save and they edged ahead on 17 minutes when Garforths' stopper could only parry a shot into the path of Adam Drury, who smashed his chance into the top corner.

Curtly Martin Wyatt had the ball in the net from a corner, but the ref saw a push on Josh Sunter in the build-up and blew for a foul.
Adam Priestley had a couple of chances to pull Town level, but his first flew over, while his second was actually saved from close range by the face of brave, but dazed Grimsby keeper Scott Drury.
Wells was called on to make another great stop and Borough had a goal disallowed for offside before the half was over.

"Toby jug" made another fine save seven minutes after the re-start, but Josh Sunter rose to nod home the resulting corner.

Jack Bradbury made the most of being left unmarked in the box and swept home a cut-back nine minutes later, signalling a triple substitution by Rob Hunter.
Martin-Wyatt, Mark Simpson and Lee Turner made way for Sean Hunter, Kane Bingley and Joe Colley and the changes looked like they might herald a fight-back when Hunter flicked home a pull-back from a marauding James Beaston.

The fight-back was over quicker than it started though, as Boroughs' Jack Debnam exploited a huge hole in the middle of the Miners and dispatched a fine finish beyond Wells.

Garforths' misery looked to be compounded when they switched off from a corner, leaving Connor Southern to easily score, but there was still time for Josh Venney to step up and fire in number six from the spot with the last kick of the game.

Garforth now face a double-header of away games at Eccleshill United, starting with a West Riding County Cup first round tie on Wednesday evening (kick-off 7.45pm)