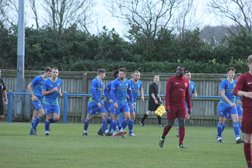 Manager Paul Marshall named a largely unchanged side to that which won 5-0 at Goole; Lee Turner starting ahead of Joe Colley.

The Miners started the game well; a break forward saw Sean Hunter's low shot easily claimed by Matthew Smith in the Albion goal. It wasn't long however before Town's top scorer had a goal to go along with his 100th appearance for the club, nipping in to tuck away Lee Turner's delivery on nine minutes. Initially it looked likely we'd to our early lead; Hunter forced a near-post save from Smith after good work from Alex Burton. Poor decision-making at the back though allowed the visitors to regroup, resulting in a 17th minute corner which led to their equaliser. Jeremie Milambo's delivery was half cleared to captain Matthew Nebard who found the net with a curling strike which Toby Wells could do little about.

Burton fired over the bar from captain James Beaston's long throw on 23 mins, before Turner shot wide after a flowing move down the left. There were spells of possession for The Lions, with Lamin Janneh looking dangerous on the right, but luckily for Town, Wells wasn't tested.

Janneh fired over the bar on 51 mins after he ran unchallenged down the left, and at the other end of the field Sam Denton came close with a glancing header just past the far post from Jack Lazenby's free kick. Sam Barker saw a 25-yard effort saved by Smith, then on 69 mins Burton shot into the side netting when supplied by Dan Williams.

Whilst his side were improved on the first half, Marshall opted to shake things up on 70 mins with the introduction of Charlie Marshall and Helmo Silva for Barker and Hunter. It was to pay dividends only five minutes later, but there was work to do at the back first; Beaston heading off the line from Nebard who connected with another Milambo corner.

It was a typically determined run down the right wing from Silva which created the winner. His delivery into the box was cleared to the feet of Lazenby who fired home, a third goal in two games for the midfielder.

There were further chances late on for Town to make it three. Burton hit the crossbar when put through by Silva, although was ruled offside, and substitute Joe Colley put a low shot wide after doing well to win the ball back on the edge of the box. Some injury time pressure from Albion led to a couple of corners, but the Miners defence held firm.

A win which lifts Paul Marshall's side to 8th in the table, and a useful three points after wins for both Eccleshill and Thackley just below us. We're on the road next Saturday as we travel to Grimsby Borough seeking to avenge the 6-1 drubbing earlier in the season (kick-off 3pm).