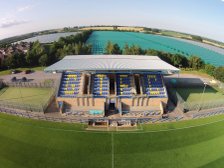 Miners battle their way to another win

Garforth made it four wins out of four in the league thanks to a winner that came as early as the sixth minute.

Former Barton player Jamie Barkway was the unlikely hero, capitalising on poor marking from a corner to perfectly place a header into the top corner from a standing position.

Garforth edged the first half, but Toby Wells had to snuff out a one-on-one chance when it came Bartons' way.

The Miners second half performance was a little dis-jointed and they were put under the cosh at times as their opponents put into trying to find an equaliser.
Barton thought they'd pulled level in the eighty second minute, when a cut-back was slammed past Wells, but the assistant was well placed to see an offside in the build-up.

Garforth could have wrapped it up minutes later, but Barton keeper Charlie Dixon produced an incredible close range save .