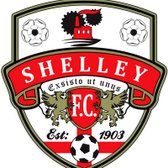 After Friday's thumping win over Huntington, our pre-season continues at The Stafflex Arena where we face Shelley FC in what is understood to be the first ever meeting between the two sides. Formerly of the Huddersfield & District League, then the West Yorkshire League, in 2018 they made the step up to the NWCL Division 1. Alongside finishing a creditable 12th in their first season, they defeated NCEL Premier Division runners-up Penistone Church in the FA Vase, so this promises to be a sterner test for Rob Hunter's side than that faced on Friday.

The thoughts of our manager on the game can be found on Outside The 92.

Away travel info can be found here.

Hope to see you there!