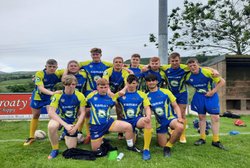 Gateshead Storm travelled to Cumbria with 12 players and cam eaway with a storming win.

Storm battle to reach the semi’s

Thanks to Alfie’s inability to pronounce todays opponents, Storm were presented with a 5 hour round trip to the Hornets Nest in Wath Brow (thanks Alfie and Harry). This would also be Storms 1st run out of the year, thanks to academy and union games meaning games have had to be pushed back. The squad was looking healthy with 14 available but with 2 late availability changes Storm were reduced to 12, with everyone needing to put in an extra shift against strong opposition. We managed to get there in good time, largely thanks to the F1 style bus driving, so the lads could stretch and get a good warm up done before kick off.
The boys looked up for it, even with the man disadvantage and players making their debut at this age group but we started in typical Storm fashion. From kick off the ball was allowed to bounce out of play giving WB good field position, another repeat set and they managed to find the line to score 1st. 6-0 the game was going to be Back and forth for a while, typified by Storms response. Forcing an error from kick off, Storm pushed into the WB red zone and lively hooker Tom Parks darted over to score, Alfie Gray converting. 6-6.
Even a man down, Storm dominated the middle with powerful runs from the pack led by front rowers Matty Stewart and Harry Lowry, Cumbria’s most hated (or loved) man depending on what you could hear from the sidelines. These runs pulled in 4/5 defenders each time and led to the next 2 tries with Siddle and Richardson combining to send Olly Paterson through on the left for the first 2 of his 5 tries today. AG converted 1. 6-16.
Alfie was the next to score, again on the back of strong runs down the middle holes appeared all over the WB defence. Alfie spotting a gap, darted through like he was looking for a roadside lay-by to score. AG converted 6-22
As it looked like Storm might run away with the game WB finally made use of their numerical advantage. The ball was spread out to the No.5 and as Storm rushed to cover the extra man, some good footwork and speed sent him back on the inside to score. The next try was a carbon copy and the conversion meant the score was 16-22. Storm eased the nerves before the break as giant back rower Ewan Brown took possession about 15m out and swatted the WB defence away like annoying midgies and nonchalantly plonked the ball down over the line. AG conv.

Half Time - Hornets 16 Storm 28- A strong 1st half, excellent in attack but mistakes letting WB back in but good battle with being down to 12.
Again mistakes cost Storm as WB bagged the 1st of the second half to close the gap again, making use of the extra man to go in at the corner. Full back Jacob Rennison pushed Storm further ahead, again good work down the left and Jacob finding a gap to run through and get over the line. AG conv 22-34.
WB fought back, with the whole town watching and cheering on from the sidelines (not even sure Whitehaven got a crowd that size this weekend), the 1st came from a dropped ball which was kicked through and dove upon in the in goal area. The second a result of some broken play and good footwork allowing the WB player to jink his way through the defence to dive over…32-34…Game on with 10 to play. WB had wind in their sails, fire in their bellies and cheered on by the now highly vocal crowd, had ideas of winning….step up Lewis Richardson to extinguish that fire and sink what hope WB had left. Lewis crashed through creating a gaping hole in the WB defence to race away to score. AG conv. He did this again but this time decided to offload the ball to Olly Paterson to bag his hat trick. 32-44. Lewis bagged his 2nd of the game after a monumental run from Ewan, collecting the ball on his own 20m he smashed through the WB defence leaving a trail of bodies in his wake before being brought down halfway in the opposing half. The ball quickly moved through hands to Lewis who went over. 32-48.
The final 2 tries were scored by Man of the Match Olly Paterson. To be honest I don’t remember the 1st of the 2 tries as the 2nd was so ridiculous it shouldn’t be allowed. 32-52 (Lewis missed conversion knocked a small child off the WB dugout it was so wide). With 10 seconds left of the game WB attempt a short kick off. The ball is collected by Lewis who decides not to see out the game but kick into the open space on the left. After a little juggle, Olly collects the ball about 30m from the WB line. With a 3 v 1 Olly decides to kick the ball in behind the covering fullback, the ball smacks of the WB player and rebounds straight back into Olly’s hands who races clear to score 32-56. Some say Harry’s conversion attempt was finally found by Matthew Stewart in the Lake District after the game, some say its still orbiting the earth.
Final Score. Hornets 32 Storm 56
An end to end game which we managed to wrestle control of in the last 10 minutes. We would like to think with a full squad available to freshen things up and let some lads recover that the mistakes which led to a couple of the tries would be eliminated. BUT….nothing can be taken away from the fact that 12 lads played out of their skins and put bodies on the line for an hour to ensure we got through to the semi-finals.
WB gave MoM to Olly Paterson, a very good choice but I couldn’t pick 1 today as 1 to 12 the boys were outstanding.
The 4 lads in the middle (Matty, Harry, Ewan and Lewis) with Tom moving them around the field, put in a massive effort to gain yards the entire game and never took 1 step back. Ryan and Olly in the centres ran like forwards taking the pressure off the middle and defended the edge superbly throughout. Jake and Jake on the wings supported the attacking play excellently and made a number of important try saving tackles. Jacob at full back covered the defence well, returned the ball strongly and took his try expertly. Tom P Alfie and Tom S controlled the tempo of the game and took the team around the pitch with Alfie attacking the line on a number of occasions with the vision of both Tom’s creating a number of scoring opportunities for us.
Here’s hoping for a home draw in the next round, I don’t think my ears or the lads bladders could handle another 5 hour round trip, but things look well going into the 1st league game of the season