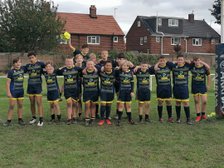 Gateshead Storm u12s took to the road again and pulled out an impressive performance to claim victory against their Yorkshire rivals.

Storm started like a house on fire. A high tackle on fullback Jacob Scofield gave Storm some great field position and a smart scoot from Will Rolls into the opposition 10m area meant that Titus Oshinowo didn't have far to run to score his first try of the game.
This was quickly follow by another try. Alex Okeke, who was impressive throughout, produced a great offload to Oshinowo who powered away down the pitch. Desperate defence stopped him, but Schofield was on hand to retrieve the ball and show great strength to carry 3 knights over the line and touch down beside the posts making it easy form him to add the conversion.
Storm were on a roll now and Will Rolls made the most of another high tackle giving Storm possession deep in the Normington half by burrowing over from dummy half to grab a try and then made it 4 tries in a row when Harry Harlow-Stephenson made the most of space created after another break from Oshinowo and Schofield.
Normington never gave up though and looked a threat every time they got the ball. Reed Bewick and Dawson Hutchinson were instumental in defence on the left hand side of the pitch to prevent the hosts scoring. But the turning point came just as they Knights looked about to score they dropped the ball and Oshinowo picked up to race 75 meters and touch down under the posts. Schofield converting to make the half-time score 24 - 0 to the visitors.

The second half started in much the same vein as the first with penalties gifting Storm the field position they needed for Sonny Hopper to barge over and touch down. Schofield was next on the score sheet with a fine individual effort capitalising on a dropped ball and rounding the Normington defence and running underneath the sticks to make the conversion by Hopper a formality.
A high tackle saw a Normington player sent to the sin bin and Harlow Stephenson made the most of the extra space putting Joshua Sowerby away down the left hand side where his pace did the rest and saw him score underneath the posts with Harlow-Stephenson adding the extras.
The playing numbers were evened up at 12 each when Harlow-Stephenson saw yellow for a high tackle and Normington got themselves a deserved converted try.
The final word of the day though went to Storm and Titus Oshinowo who grabbed his third try after a smart switch move with Will Rolls.

It was another great experience on the road for the Storm young guns - hopefully there will be many more!