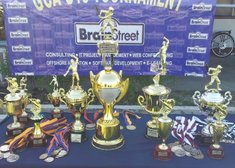 Transport Aiming to Retain The Title. DCC looking to Regain the Title They Won Three Times.

The BRAINSTREET Final is set for Sunday 12 April 2015 at the Malteenoes Sports Club Ground. The match starts at 9:30 AM.

Demerara Cricket Club (DCC) is back in the BRAINSTREET Final and will look to dethrone Transport Sports Club and win the 2015 Competition. Transport will be anxious to defend the championship they won last year by defeating GNIC in the Final. While DCC who won the title in each of the first three years (2011, 2012 & 2013) of the competition will be aiming to regain the championship. An exciting contest is anticipated.