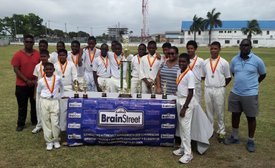 DEMERARA CRICKET CLUB ARE CHAMPIONS OF THE GCA – BRAINSTREET UNDER-15 COMPETITION ONCE AGAIN.

DCC Defeated Transport Sports Club by 5 Wickets to Win the Brainstreet U-15 Competition 2015 and Make it Four BRAINSTREET Championships in Five Years.

Transport Sports Club batted first and was dismissed for a paltry 85 runs. Joel Spooner top scored with 31 runs and was the only batsman who stood up to the DCC bowlers.
Bowling for DCC; Dequan Bamfield took 3 wickets for 10 runs, Jospiece Jones took 2 for 10, Qumar Torrington took 2 for 11 and Nkosie Beaton took 2 for 25.

In reply DCC scored 86 for the loss of 5 wickets. Alphius Bookie led his team to victory with an unbeaten 33 runs and Robin Williams made 20.
Bowling for Transport; Joel Spooner took 2 wickets for 17 runs and Akeem Maloney 2 for 17 also.