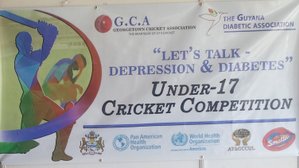 GCA - GUYANA DIABETIC ASSOCIATION UNDER-17 CRICKET COMPETITION IS AT THE SEMI-FINAL STAGE.

This is the second year of this U-17 competition and each of the sponsors expressed how keen they were to be a part of this competition which will give the youths an opportunity to showcase their skills while raising awareness of Diabetes.

The competition will involve eight teams playing in two zones with the top two teams in each zone advancing to the semi-finals.

At the end of the preliminary rounds where each team played three matches, the points standings are:

The Final is scheduled to be played on Monday, 1st May, 2017 beginning at 1:00 PM at the Malteenoes Sports Club ground. The Presentation Ceremony will take place at the end of the final.