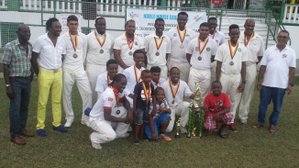 Man Of The Match Rafael Singh’s Match Haul of 13 Wickets For 87 Runs Was Not Enough To Stop GNIC.

In reply Transport was dismissed for 123 runs in 52.2 overs; Shaun Massiah top scored with 26 runs and Charwayne McPherson made 16.

Bowling for Transport in the 2nd innings: Rafael Singh had even better figures than the first innings, he took 7 wickets for 58 runs, Azeem Azeeze took 2 for 25 and Joshua Wilson took 1 for 6.

The captains agreed to call off the game because less that 20 overs remained in the game and an outright result was unlikely.