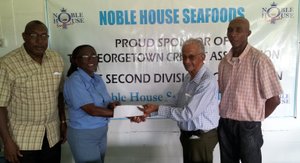 Noble House Seafoods Ltd personnel manager Mr Piercy Corlette (second from right in photo) said that Noble House Seafoods was delighted to continue partnering with the GCA by sponsoring the competition for the fifth time and looked forward to the development of a number of young players through their involvement in this competition.

GCA President, Roger Harper (center of photo), thanked Noble House Seafoods for their continued support to cricket and the youths in Georgetown. Mr Harper pointed out that the format of the competition was adjusted to ensure completion in a timely manner. He pointed out that because of the new format he expects that each match will have greater significance and meaning and will encourage teams and players to be more focused and apply themselves better.

GCA Competitions Chairman (far right in photo) explained that the competition would be played in four zones with the top two teams in each zone playing in the quarter-finals. The first round of matches are scheduled for the 11th April, 2015.

In the photo above, Mr Piercy Corlette hands over the sponsorship cheque to GCA Secretary - Ms Deborah McNichol flanked on the far left by GCA Senior Selectors Chairman - Mr Mark Harper and on the far right by Competitions Committee Chairman - Mr Shaun Massiah.