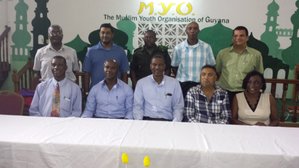 ROGER HARPER RETURNED UNOPPOSED AS PRESIDENT OF THE GCA FOR THE 2017 - 2019 TERM.

ROGER HARPER STILL AT THE HELM OF GCA

Roger Harper was re-elected unopposed as President of the Georgetown Cricket Association (GCA) when the body held its Annual General Meeting and Elections on Tuesday night, 31 January 2017, at Muslim Youth Organisation, Woolford Avenue.

Addressing the media after the election, Harper thanked the clubs for their confidence in him and said that he looked forwarded to serving them and cricket in Georgetown for the new term, 2017-2019. “We look forward to serving the members with the aim to build on the work we have done over the years. We will continue to implement development programmes and ensure that our members have competitions at all levels,” he added.

He pointed out that the GCA will aim to give the players especially the youths much opportunity to showcase their talent with the intention of moving them on to greater heights. “If we can help the players to develop their skills and enhance their ability then we think that we will be assisting to develop cricket in Guyana and the wider region,” he posited.

The availability of grounds is one of the problems that continue to plague the GCA, but Harper indicated that there has been some improvement is this area; however, his committee intends to meet with some of the clubs on the way forward. “The availability of grounds is still an issue, we intend to meet with the some of these clubs whose grounds are not available as often as it should be, especially for first division grounds, and work out some arrangement where they can be made available more often,” he explained.

Harper stated that they will work to garner more sponsorship for the youth tournaments and hope they can run off more competitions during the school vacations.

The respective committees of the GCA will be named shortly.