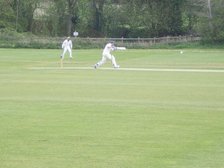 Picture: Mark Steele batting for Geddington against Old Wellingburians.
Geddington 180 48.5 Overs (16pts), Old Wellingburians 154-8 51 Overs (11pts).
Geddington 1st Team had a Winning Draw in their first game of the new league season against Old Wellingburians.
1st team batted first and were all out for 180, Connor McAlindnen (70) and Mark Steele (67) both scored half-centuries for the hosts. Both McAlinden & Steele put on 112 for the 3rd wicket partnership, but then Simon Denton (12.5-2-23-9) produced a brilliant 2nd spell of bowling by taking 9 wickets in the match for the Old Wellingburians, Nehal Patel was the other wicket-taker for the visitors.
In reply, Matthew Ingram (25) and John Bowers (56) got the Old Wellingburians innings off to a good start with a 1st wicket partnership of 61, but then wickets fell at regular periods, as the visitors finished on 154-8 off their 51 overs, Umar Iqbal (27) was the other main run-scorer. Colin Judd (3-44) was the pick of the Geddington bowlers with three wickets, Tiaan Raubenheimer (2-25) and Chris Murdoch (2-37) also took two wickets each for the hosts.
Share via
FacebookTwitter
https://www.pitchero.com/clubs
Recent news