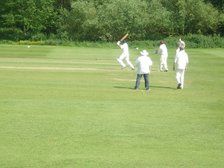 Picture: Colin Judd top-scoring for Geddington 1st Team against Isham 1st Team.
Geddington 172-9 48 Overs (16pts), Isham 94-9 48 Overs (6pts).
The match between Geddington and Isham ended in a winning draw for the hosts.
Geddington batted first and were struggling at 68-7 with only Mark Steele (28) scoring any runs early on in the innings, but then a 8th wicket partnership of 83 between James Baker (45) and Colin Judd (48) got the hosts back on track as they finished on 172-9 off their 48 overs. Andrew Law (4-38) was the pick of the Isham bowlers with four wickets, there was also two wickets for Christopher Long (2-32) for the visitors.
In reply, Isham finished their innings on 94-9 with only Chris Harrison (43) and George Chudley (24*) the only two batsman reaching double figures for the visitors. Connor McAlinden (3-5) and Jamie Kay (3-31) both took three wickets each for Geddington and there was also two wickets for Baker (2-24) and one for Tiaan Raubenheimer (1-17) as the game finished in the draw.
Share via
FacebookTwitter
https://www.pitchero.com/clubs
Recent news