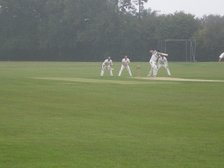 Mark Steele Scores An Unbeaten Century As The 1st Team Make It 5 Wins In A Row.

Picture: Mark Steele scoring an unbeaten century for Geddington 1st Team away at Rothwell 1st Team.
Geddington 1st Team 228-2 Declared 43 Overs (30pts), Rothwell 1st Team 106 43.3 Overs (1pts).
An unbeaten century from Mark Steele guided Geddington 1st Team to a 122 runs victory away at Rothwell 1st Team to make it 5 wins in a row.
Geddington batted first and made 228-2 declared off 43 overs, Steele (124* off 133 balls) top-scored with an unbeaten century which included 12 fours and 4 sixes in his innings, Tiaan Raubenheimer (51) added support with a half-century, as both Steele and Raubenheimer put on 118 for the 2nd wicket partnership. Ben Parker and George Parker both took a wicket each for Rothwell.
In reply, Jamie Kay (4-18) was the pick of the Geddington bowlers with four wickets as Rothwell were All Out for 106, Connor McAlinden (3-22) also took three wickets and there was one each for Mark Neave, James Baker and Raubenheimer. James Swingler (33*) top-scored for the home side, Adnan Khan (20) was the only other batsman to get past the twenties mark as Geddington claimed the 30 points to stay 13 points behind Finedon Dolben 2nd team in the race for the Division 1 title.
Share via
FacebookTwitter
https://www.pitchero.com/clubs
Recent news