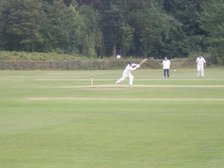 An Unbeaten Half-Century From Mark Neave Sends Geddington To The Top Of The Table.

Picture: Mark Neave scoring 78 not out for Geddington 1st Team against Old Northamptonians 2nd Team.
Old Northamptonians 2nd Team 171-8 50 Overs (5pts), Geddington 1st Team 175-3 42.4 Overs (25pts).
Geddington 1st Team moved to the top of the NCL Division 1 table with victory over Old Northamptonians 2nd Team by 7 wickets and Finedon Dolben's 2nd Team defeat to Weekley & Warkton. Geddington will win the NCL Division 1 title next week with victory over Wellingborough Town next Saturday.
Old Northamptonians batted first and made 171-8 off their 50 overs, Derrick Sanya (43*), James Mellor (31) and Satchi Mahendran (25) were all in the runs for the visitors. Tiaan Raubenheimer (3-32) was the pick of the Geddington bowlers with three wickets, James Baker (2-38) took two wickets and there was one each from Connor McAlinden, Mark Neave and Jamie Kay.
In reply, Geddington lost two early wickets as they were 25-2, but then Neave and Danial O'Callaghan got the innings back on track with a 76 run partnership for the 3rd wicket, before O'Callaghan was out for 29. Neave & Lee Sutherland (47*) in the end guided Geddington to victory with an unbeaten 74 run partnership for the 4th wicket with Neave finishing unbeaten on 78.
Share via
FacebookTwitter
https://www.pitchero.com/clubs
Recent news