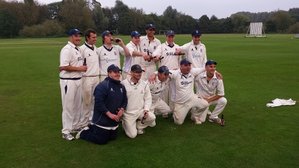 Picture: Geddington 1st Team NCL Division 1 Champions for 2014.
Geddington 1st Team 226-5 Declared 45 Overs (30pts), Wellingborough Town 1st Team 169 50.2 Overs (4pts).
Tiaan Raubenheimer took the final wicket of the game to guide Geddington 1st Team to the Northants Cricket League Division 1 title after defeating Wellingborough Town by 57 runs.
Raubenheimer (5-31) was the pick of the Geddington bowlers with five wickets as Wellingborough were All Out for 169 with 28 balls left of the game, James Baker (3-36) took three wickets and there was also two for Jamie Kay (2-47). Kyle Awbery (48) and James Howes (41) were in the runs for Wellingborough, both J Howes and K Awbery put on 68 for the 7th wicket partnership after being 80-6.
Earlier, Mark Steele (104*) top-scored with his third century for the season as Geddington declared on 226-5 off their 45 overs, Mark Neave (57) also scored a half-century, as Steele and Neave put on 125 for the 1st wicket partnership, Raubenheimer (22), Baker (15) were also in the runs for the home side. Thomas Howes (5-60) was the pick of the Wellingborough bowlers with five wickets.
It is the first time at Geddington Cricket Club 1st Team have done the League & Cup double since 1993, when they won the Northants Alliance League Division 1 Title and the Simon Thornton Cup. A Great season all round well done to Captain Tiaan Raubenheimer and all the lads involved in the club.
Share via
FacebookTwitter
https://www.pitchero.com/clubs
Recent news