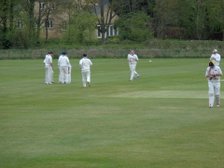 Defeat For Geddington 1st Team In Their First Home Game Of The Season.

Saturday 2nd May 2015
Northants Cricket League Premier Division
Geddington 1st XI V Finedon Dolben 1st XI
Finedon Dolben won by 170 runs.
Finedon Dolben (30pts) 274-5 Declared 48 Overs, Geddington (2pts) 104 35.5 Overs
Picture: Geddington players celebrating a wicket against Finedon Dolben.
Geddington 1st Team played their first home league game in the NCL Premier Division against Finedon Dolben 1st Team at Geddington on Saturday.
Finedon Dolben batted first and made 274-5 declared off 48 overs, an unbeaten century from Sean Davis (120*) was the main stay of the visitors innings, there was also a half-century for Shane Devoy (70 off 58 balls). Greig Hofbauer (44) was also in the runs. Jamie Kay (2-54) and Connor McAlinden (2-65) both took two wickets each for Geddington.
In reply, Geddington were All Out for 104 in 35.5 overs, Kyle Morrison (33) and McAlinden (21) were the only two batsman to get past the twenties mark for the home side. Devoy (3-19) was the pick of the Finedon Dolben bowlers with three wickets and there was also two wickets each for Will Sneath (2-20) and Primesh Patel (2-21) as the visitors won by 170 runs.
Share via
FacebookTwitter
https://www.pitchero.com/clubs
Recent news