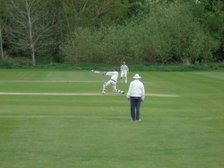 Raubenheimer Scores A Half-Century As The 1st Team Lose To Rushton.

Saturday 9th May 2015
Northants Cricket League Premier Division
Geddington 1st XI V Rushton 1st XI
Rushton won by 121 runs.
Rushton (30pts) 247-5 55 Overs, Geddington (3pts) 126 49.5 Overs
Picture: Tiaan Raubenheimer during his innings of 52 for Geddington against Rushton.
An unbeaten century and four wickets for Andrew Reynoldson guides Rushton to a 121 runs victory over Geddington 1st Team at Geddington Cricket Club.
Rushton won the toss and batted first and made 247-5 off their 55 overs, Reynoldson (132* off 171 balls) top-scored with an unbeaten century for the visitors, Adil Araf (62) was also in the runs with a half-century. Kyle Morrison (3-60) was the pick of the Geddington bowlers with three wickets and there was also two for Jamie Kay (2-61).
In reply, Geddington were All Out for 126 in 49.5 overs, Tiaan Raubenheimer (52) top-scored with a half-century for the home side, Ryan Bell (20) was the only other batsman to get into double figures for the hosts. Reynoldson (4-15) was the pick of the Rushton bowlers with four wickets. Araf (2-14) and Marc Jackson (2-50) both picked up two wickets each for the visitors.
Share via
FacebookTwitter
https://www.pitchero.com/clubs
Recent news