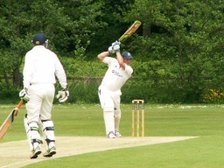 Saturday 23rd May 2015
Northants Cricket League Premier Division
Geddington 1st XI V Oundle Town 1st XI
Geddington Winning Draw.
Geddington (18pts) 211-7 55 Overs, Oundle Town (10pts) 178-9 55 Overs
Picture: Mark Steele scoring a half-century for Geddington 1st Team against Oundle Town 1st Team.
Geddington 1st Team had a Winning Draw at home against Oundle Town 1st Team at Geddington Cricket Club.
Geddington batted first and made 211-7 off their 55 overs, Mark Steele (59) and Connor McAlinden (57*) both scoring half-centuries for the home side in their innings, Kyle Morrison (41) was also in the runs for the hosts. Ben Graves (3-44) was the pick of the Oundle bowlers with three wickets.
In reply, Oundle finished on 178-9 off their 55 overs, Cameron Wake (62) top-scoring for the visitors with a half-century, Alex Martin (44) was also in the runs, both Wake and Martin put on 73 for the 3rd wicket partnership as they were on 119-3 before wickets started to tumble. Jamie Kay (3-31) was the pick of the Geddington bowlers with three wickets. Tiaan Raubenheimer (2-0), Marcus Knight (2-32) and Morrison (2-42) all took two wickets each for the home side as the game finished in a winning draw for Geddington.
Share via
FacebookTwitter
https://www.pitchero.com/clubs
Recent news