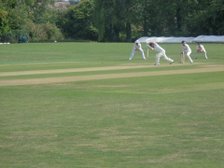 1st Team End A Run Of Defeats With A Draw Away At Oundle Town 1st Team.

Saturday 8th August 2015
Northants Cricket League Premier Division
Oundle Town 1st XI V Geddington 1st XI
Oundle Town Winning Draw.
Oundle Town (17pts) 280-5 Declared 53 Overs, Geddington (6pts) 160-7 57 Overs
Picture: Marc Bell Batting for Geddington 1st Team away at Oundle Town 1st Team.
The match between Oundle Town 1st Team and Geddington 1st Team at Milton Road finished in a Winning Draw for the home side, but ended a run of defeats for the visitors.
Oundle Town batted first and made 280-5 declared off their 53 overs, Zeeshan Manzoor (76*) and Mark Hodgson (63) both scored half-centuries for the home side, Ben Groom (47) and Alex Martin (31) were also in the runs for the hosts. Colin Judd (2-43) and Tiaan Raubenheimer (2-70) both took two wickets each for Geddington and there was also a wicket for Kyle Morrison.
In reply, Geddington were 64-5 after Bashrat Hussain (3-25) took three early wickets for Oundle Town. But a 6th wicket partnership of 56 between Marc Bell (42) and Raubenheimer got the visitors back on track. In the end Raubenheimer (50*) finished unbeaten with a half-century for Geddington as they finished their innings on 160-7 off their 57 overs as the match ended in the draw, Mark Neave (27) was also in the runs for the visitors. Petrus Jeftha (2-52) also took two wickets for the hosts.
Share via
FacebookTwitter
https://www.pitchero.com/clubs
Recent news