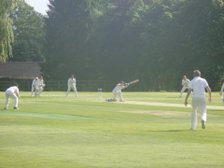 Luke Cummins Hits Winning Six For Geddington 1st Team Away At Horton House 1st Team In A Brilliant Match Between The Two Teams.

Match Picture: Mark Steele scoring 49 with the bat for Geddington 1st Team away at Horton House 1st Team.
Saturday 10th June 2017
Northamptonshire Cricket League Premier Division
Horton House 1st XI V Geddington 1st XI
Match Result: Geddington won by 1 wicket.
Horton House (8pts) 253 49.2 Overs, Geddington (20pts) 256-9 49.4 Overs.
Geddington 1st Team won a brilliant game of cricket by 1 wicket with Luke Cummins hitting a winning six with two balls left in the game against Horton House 1st Team at Horton House Cricket Club on Saturday.
Cummins hit an unbeaten 42 for Geddington as they reached their target with 9 wickets down, as the last two batsman Cummins and Jamie Kay put on an unbeaten 13 partnership for the 10th wicket after being 243-9. Amit Dhadwal (71) top-scored with a half-century for the visitors, Mark Steele (49) was also in the runs in an innings which included 4 fours and 4 sixes, both Dhadwal and Steele put on 102 for the 4th wicket partnership. William Knibbs (3-28) and Mark Wolstenholme (3-79) both took three wickets with the ball for Horton House, Elliott Ruff (2-55) also took two wickets for the home side.
Earlier, Horton House were All Out for 253 in 49.2 overs, Shiv Jhala (101* off 85 balls) top-scored with an unbeaten century for the home side, Ewan Cox (88) also scored a half-century, Cox and Jhala put on 122 for the 6th wicket partnership after being 87-5. Chris Murdoch (4-92) took four wickets with the ball for Geddington, Tiaan Raubenheimer (2-34) and Kay (2-35) also took two wickets and there was also a wicket each for Ryan Bell (1-32) and Dhadwal (1-34) for the visitors.
But this game will go down as one of the best matches of the 2017 cricket season in the Northamptonshire Cricket League Premier Division with 509 runs and 19 wickets in the match and the game going down to wire.
Share via
FacebookTwitter
https://www.pitchero.com/clubs
Recent news