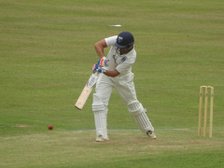 Andrew Reynoldson Scores His First Century For Geddington 1st Team In Their Victory Away At Rushton.

Geddington batted first and made 322-4 off their 50 overs, Andrew Reynoldson (100* off 116 balls) top-scored with an unbeaten century for the visitors, Luke Cummins (60* off 45 balls) also made an unbeaten half-century, both Reynoldson and Cummins put on an unbeaten 141 partnership for the 5th wicket, Adil Arif (47) and Ben Mansell (35) got the innings off to a good start by putting on 69 for the 2nd wicket partnership. Ben Parker, Glenn Burgess, Jack Parker and George Parker all took a wicket each with the ball for Rushton.