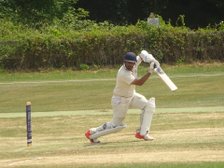 An impressive 140 off 72 balls from Rob White, an innings which included 22 fours and 5 sixes guided Old Northamptonians to their victory target of 228 in the 24th over, Thomas Hafil (63*) scored an unbeaten half-century for the visitors, White and Hafil put on 214 for the 1st wicket partnership. Andrew Reynoldson was the only wicket-taker with the ball for Geddington.

Earlier, Geddington batted first and made 227-7 off their 50 overs, Adil Arif (88) and Reynoldson (53*) both made half-centuries with the bat for the home side, Ben Mansell (36) was also in the runs, Arif and Reynoldson put on 81 for the 3rd wicket partnership. Tom Heathfield (3-52) took three wickets with the ball for Old Northamptonians, there was also two wickets each for White (2-51) and Gareth Wade (2-54) for the visitors.