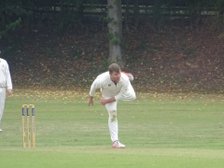 Cameron Braans (2.5-1-9-5) was the star performer with the ball on his 1st Team debut for Geddington as he took five wickets as Wollaston were All Out for 137 in 34.5 overs, chasing 195 to win. Colin Griggs, Harry Bolton, Jack Thurman and Adil Arif all took a wicket each for the visitors and there was also a Run-Out from Braans in the field. Patrick Bright (35) and Mark Ralph (24) were the main run-scorers with the bat for the home side.

Earlier, Geddington batted first and made 194-7 off their 50 overs, Andrew Reynoldson (79) top-scored with a half-century for the visitors, Chris Murdoch (32) and Ned Wilson (20) were also in the runs with the bat, Reynoldson and Murdoch put on 69 for the 6th wicket partnership after being 106-5. Praveen Chandran (4-41) took four wickets with the ball for Wollaston, there was also a wicket each for Lewis North-Row, Christopher Perry and Cameron Monteith for the home side.