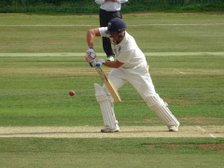 Charlie Thurston was the star performer with the bat for Rushden Town as they reached their victory target of 177 in 18 overs with the loss of 2 wickets, Thurston top-scored with a century by scoring 110 off 57 balls in an innings which included 20 fours and 3 sixes, Thurston and Sam Kumar put on 120 for the 1st wicket partnership for the visitors, Chanaka Ruwansiri (46* off 23 balls) was also in the runs with the bat to guide them to the win. Cameron Braans and Adil Arif both took a wicket each with the ball for Geddington.

Earlier, Geddington batted first and were All Out for 176 in 47.5 overs, Andrew Reynoldson (57) top-scored with a half-century for the home side, Braans (22) and Lee Sutherland (19) were also in the runs with the bat. Tom Firm (4-61) took four wickets with the ball for Rushden Town, there was also three wickets for Oliver Warwick (3-38) and two for Ruwansiri (2-37) for the visitors.