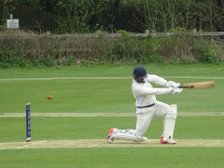 Defeat For Geddington 1st Team On The Opening Day Of The League Season Against Old Northamptonians 1st Team.

Geddington 1st Team were defeated by 10 wickets against Old Northamptonians 1st Team at Geddington Cricket Club on a opening day of the NCL Premier Division season on Saturday.

An unbeaten century from Rob White (125* off 65 balls) in an innings which included 13 fours and 10 sixes guided Old Northamptonians to victory in just 22 overs with 10 wickets to spare, William Heathfield (50*) also scored a half-century with the bat, as both White and Heathfield put on an unbeaten 178 partnership for the 1st wicket.