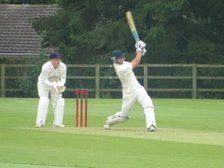 The match between Horton House 1st Team and Geddington 1st Team ended in a Interrupted Draw in the Northants Cricket League Premier Division at Horton House Cricket Club on Saturday.

In reply, Horton House lost 15 overs in their innings due to rain during and after the tea interval, leaving them with 189 to win off 37 overs, the home side were 131-2, with Parmar (65) top-scoring with a half-century, Andrew Neate (49*) and Aditya Gupta (21) also in the runs, but then wickets fell at regular periods, leaving the hosts finishing their innings on 180-7 off their 37 overs. Jack Parker (3-22) took three wickets with the ball for Geddington, including two wickets in two balls, there was also a wicket each from Adil Arif, G Parker and Bradley Armer, there was also a Run-Out from Andrew Reynoldson for the visitors.