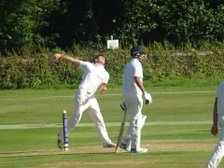 George Parker Takes Four Wickets For Geddington 1st XI In Their Final Match Of The Season At Home To Horton House 1st XI.

The warm-ups were little different for the final game of the season, with a football match between Geddington and Horton House before the start of the cricket match, in which Geddington won the football match.

When the cricket action began, Geddington batted first and were All Out for 129 in 32 overs, Andrew Reynoldson (22), Jack Parker (21), Patrick Harrington (20) and Ben Silver (19) were in the runs with the bat for the home side. Karan Parmar (4-46) took four wickets with the ball for Horton House, Cameron Blake (2-13) and Jay Parmar (2-41) also took two wickets, there was also a wicket each for Andrew Neate and William Knibbs for the visitors.

In reply, Horton House reached their victory target in the 36th over and 7 wickets down, James Redding (35) top-scored with the bat, Alex Mills (15*) and J Redding put on 50 for the 6th wicket partnership, after the visitors were 65-5 early on in their innings, J Parmar (26) was also in the runs. George Parker (4-29) took four wickets with the ball for Geddington, Reynoldson (2-15) took two wickets, there was also a wicket for Chris Murdoch (1-29) for the home side.