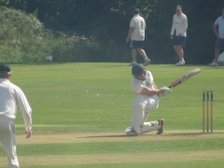 Patrick Harrington Scores His First Half-Century For Geddington 1st XI In Their Defeat Away At Oundle Town 1st XI.

Geddington 1st Team were defeated by 6 wickets against Oundle Town 1st Team in their final away match of the season at Oundle Town Cricket Club on Saturday.

Geddington batted first and were All Out for 237 in 49.3 overs, Patrick Harrington (71 off 49 balls) in an innings which included 13 fours and 1 six top-scored with his first half-century for the club, Adil Arif (37 off 25 balls), Chris Harrison (33), Ben Silver (30) and Bradley Armer (29) were also in the runs with the bat, the visitors were 70-5, before a 94 partnership for the 6th wicket between Harrington & Silver got the innings back on track. Jack Bolsover (4-31) took four wickets with the ball for Oundle Town, there was also three wickets for Harrison Craig (3-49) and two for Ben Graves (2-41) for the home side.

In reply, Oundle Town reached their victory target with 22 balls to spare and the loss of 4 wickets, Daniel Robinson (98) top-scored with the bat for the home side in an innings which included 12 fours, Bolsover (48), Conor Craig (21) and Graves (20) were also in the runs, Robinson and Bolsover put on 122 for the 2nd wicket partnership. Jack Parker, George Parker, Arif and Armer all took a wicket each with the ball for Geddington.