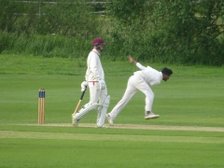 Defeat For Geddington 1st Team Away At Brigstock 1st Team.

Geddington 1st Team were defeated by 3 wickets against Brigstock 1st Team in a 70 over match at Brigstock Cricket Club on Saturday, after early rain delayed the match until 3:15pm.

Geddington batted first and declared on 178-9 off their 45.4 overs, Andrew Reynoldson (55) top-scored with a half-century for the visitors, Adil Arif (38 off 26 balls), Chris Harrison (31) and Tiaan Raubenheimer (27) were also in the runs with the bat, Reynoldson and Raubenheimer put on 62 for the 5th wicket partnership after being 68-4. Tashwin Lukas (4-41) took four wickets with the ball for Brigstock, there was also two wickets for Mohammed Saif (2-37) and one each for George Groenland, Duncan Croker and Patrick Croker for the home side.

In reply, Brigstock chased their victory target of 179 with the loss of 7 wickets and 1 over to spare, Lukas (60 off 40 balls) top-scored with a half-century for the home side, Suk Singh (40) and Asim Munir Butt (36 off 28 balls) also contributed with the bat, Butt and Suk Singh put on 66 for the 2nd wicket partnership. Al Mahmud Hasan (3-39) took three wickets with the ball for Geddington, there was also a wicket each for Arif, Bradley Armer and Chris Murdoch for the visitors.