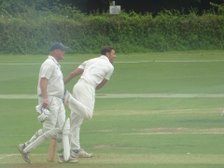 Bradley Armer starred with ball and bat for Geddington 1st Team in their 8 wicket win against Desborough Town 1st Team at Geddington Cricket Club on Saturday.

Armer (7-1-38-5) took a hat-trick and five wickets with the ball for Geddington, as Desborough Town were All Out for 183 in 46 overs, George Parker (2-48) took two wickets, there was also a wicket for James Taylor (1-17) for the home side. Simon Renshaw (67) top-scored with a half-century for the visitors, Craig Burger (49) was also in the runs with the bat, Renshaw and Burger put on 50 for the 6th wicket partnership.

In reply, Geddington reached their victory target with 28 balls to spare and 8 wickets in hand, Armer (80*) top-scored with a unbeaten half-century for the home side, Jack Parker (46), Chris Harrison (23) and Andrew Reynoldson (19*) were also in the runs with the bat, Armer and J Parker put on 92 for the 2nd wicket partnership. Renshaw (1-18) and Sam Harris (1-36) both took a wicket each with the ball for Desborough Town.