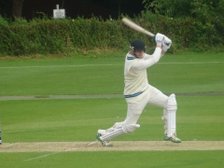 Rob White (77 off 80 balls) in an innings which included 9 fours and 2 sixes, top-scored with a half-century for Old Northamptonians in their 224 All Out in 40 overs, there was also contributions with the bat from Paul Harris (37 off 24 balls) and Paul Hafil (35) for the visitors, Hafil and Harris put on the highest wicket partnership of the innings, with 50 for the 8th wicket. Adil Arif (3-36) and Jack Parker (3-51) both took three wickets each with the ball for Geddington, there was also a wicket each for Andrew Reynoldson (1-26) and Luke Thomas (1-28) for the home side, there was also two Run-Outs in the field from George Parker and J Parker.