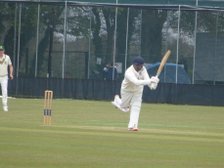 Adil Arif produced one of the great all-round performances with bat and ball for Geddington 1st XI in their 50 runs victory against Overstone Park 1st XI, at Overstone Park Cricket Club on Saturday, Arif scored an unbeaten 113 off 55 balls with the bat, and then took an impressive six wickets, including taking a hat-trick with the ball to win the match for the visitors with just 5 balls left in the match.

Arif (12.1-1-39-6) took six wickets with the ball for Geddington, including taking a hat-trick with wickets in the last two balls of the 48th over, and then the first ball of the last over, as Overstone Park were All Out for 198 in 49.1 overs, George Parker (2-81) took two wickets with the ball for the visitors, there was also a wicket each for Andrew Reynoldson (1-9) and Chris Murdoch (1-36). Kunal Patel (54*) top-scored with an unbeaten half-century for the home side, there was also contributions with the bat from Matthew Sunter (34), James Sales (33), Adam Davies (21) and Charles Edwards (20) for the hosts. Davies and Patel put on 70 for the 8th wicket partnership, the highest partnership of the innings, after they were 118-7.