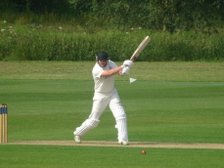 Jack Parker & Patrick Harrington In The Runs For Geddington 1st XI With Victory Away At Brigstock 1st XI.

Geddington 1st XI kept up their good form with a 3 wickets victory against Brigstock 1st XI, at Brigstock Cricket Club on Saturday in the Northamptonshire Cricket League Premier Division.

In reply to Brigstock 161-8, Geddington were 15-4 early on in their innings, but a half-century from Jack Parker (75) in an innings which included 10 fours, and Patrick Harrington (41) got the visitors back on track with an 89 partnership for the 5th wicket, before Adil Arif (22 off 22 balls) and J Parker put on 49 for the 6th wicket partnership, and then Chris Murdoch hit the winning runs with a boundary to guide the away side to victory. Mohammed Danyaal (4-50) took four wickets with the ball for the home side, Bashrat Hussain (2-26) also took two wickets, there was also a wicket for Jamie Delargy (1-22) for the hosts.

Earlier, Brigstock batted first and made 161-8 off their 40 overs, after the delayed start due to rain, which made it a 40 overs per side match, Danyaal (42 off 42 balls) in a innings which included 2 fours and 3 sixes, Asim Butt (41) and George Groenland (35) were the main run-scorers with the bat for the home side. Murdoch (12-3-39-3) and George Parker (3-59) both took three wickets each with the ball for Geddington, there was also a wicket each for Sam Smith (7-1-17-1) his first Premier-Division wicket and Arif (1-46) for the visitors.