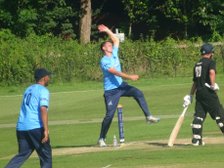 Adil Arif, Andrew Reynoldson and George Parker all starred with bat and ball for Geddington 1st XI, in their 36 runs victory against Overstone Park 1st XI at Geddington Cricket Club on Saturday.

In reply, Overstone Park finished on 231-9 off their 50 overs, Jack Johnson (96) in an innings which included 11 fours and 1 six, top-scored with a half-century, just falling four runs short off his century, Charles Edwards (32) and Capel (32) were the other main run-scorers with the bat for the visitors, Edwards and Johnson put on 69 for the 2nd wicket partnership, the highest partnership of the innings. G Parker (10-1-46-5) was the pick of the Geddington bowlers with five wickets, James Gaul (2-44) took two wickets, there was also a wicket each for Reynoldson (1-33) and Chris Murdoch (1-36) for the home side.