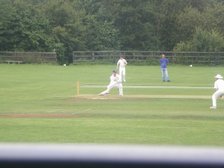 Templeman Scores His First Century In A High Scoring Game.

Picture: Ben Templeman scoring 114 not out with the bat for Geddington 2nd Team against Raunds.
Raunds 1st Team 321 46.1 Overs (13pts), Geddington 2nd Team 262-3 53 Overs (14pts).
The match between Geddington 2nd Team and Raunds 1st Team ended in a high-scoring draw with Ben Templeman (Geddington) and Michael Dicks (Raunds) both scoring centuries for their teams.
Templeman (114*) scored an unbeaten century for Geddington as they finished on 262-3 off their 53 overs, Marcus Knight (86*) was also in the runs with an unbeaten half-century. Both Templeman and Knight put on 163 not out for the 4th wicket partnership after the hosts were 99-3.
Earlier, Dicks (131) top-scored with a century for Raunds in their 321 All Out in 46.1 overs, Daniel Piggott (59) and Joshua Andic (56) also scored half-centuries for the visitors. Mark Franklin (4-53) was the pick of the Geddington bowlers with four wickets, Callum Fox (2-34) also took two wickets and there was one each for Adam Sturgess, Lee Sutherland, Knight and Matt Johns.
Share via
FacebookTwitter
https://www.pitchero.com/clubs
Recent news