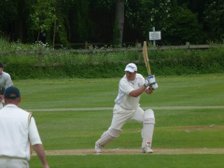 Half-Centuries From Goodjohn & Sutherland Guide The 2nd Team To A Opening Day Victory.

Saturday 25th April 2015
Northants Cricket League Division 4
Geddington 2nd XI V Raunds 1st XI
Geddington won by 3 wickets.
Raunds (11pts) 220-9 50 Overs, Geddington (22pts) 222-7 49.1 Overs
Picture: David Goodjohn scoring 72 with the bat for Geddington.
Geddington 2nd Team kicked off their 2015 campaign with an opening day victory by 3 wickets at home to Raunds 1st Team at Geddington.
David Goodjohn (72) and Lee Sutherland (71) both scored half-centuries for Geddington, both Goodjohn and Sutherland put on 143 for the 4th wicket partnership after the home side were 24-3. An unbeaten 29 for Marcus Knight then guided the home side to their victory target with 5 balls to spare. George Earl (4-37) was the pick of the Raunds bowlers with four wickets and there was also two for Ollie Bates (2-49).
Earlier, Mark Toseland (4-59) was the pick of the Geddington bowlers with four wickets as Raunds made 220-9 off their 50 overs, Knight (2-35) and Sutherland (2-53) both took two wickets each for the home side. Duncan Green (59) top-scored with a half-century for the visitors.
Share via
FacebookTwitter
https://www.pitchero.com/clubs
Recent news