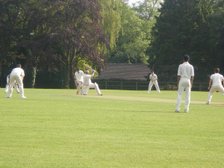 First Defeat Of The Season For The 2nd Team.

Saturday 9th May 2015
Northants Cricket League Division 4
Bowden 1st XI V Geddington 2nd XI
Bowden won by 5 wickets.
Geddington (5pts) 111 44.5 Overs, Bowden (22pts) 113-5 36.4 Overs
Picture: Mark Pearson top-scoring with 29 for the 2nd Team Away at Bowden.
Geddington 2nd Team were defeated for the first time this season away at Bowden 1st Team by 5 wickets at Bowden Cricket Club.
Geddington batted first and were All Out for 111 in 44.5 overs, Mark Pearson (29) top-scored with the bat for the visitors, David Goodjohn (21) was the only other batsman to get past the twenties mark. Sam Keenan (4-39) was the pick of the Bowden bowlers with four wickets, Stephen Bellamy (2-12) and Wepener Groenewald (2-33) both picked up two wickets each for the home side.
In reply, Charlie Standley (25) and Ben Wade (20*) were in the runs for Bowden as they reached their target with loss of 5 wickets, Lee Sutherland (2-21) and Mark Toseland (2-32) picked up two wickets each for Geddington and there was also a wicket for Pearson.
Share via
FacebookTwitter
https://www.pitchero.com/clubs
Recent news