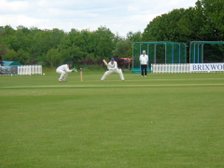 A Match Winning Partnership Between Sutherland & Pearson Guide The 2nd Team to Victory.

Saturday 6th June 2015
Northants Cricket League Division 4
Wicken 1st XI V Geddington 2nd XI
Geddington won by 3 wickets.
Wicken (10pts) 177-9 50 Overs, Geddington (22pts) 178-7 45.1 Overs
Picture: Lee Sutherland scoring 62 for Geddington 2nd Team away at Wicken 1st Team.
Geddington 2nd Team won by 3 wickets away at Wicken 1st Team at Wicken Cricket Club.
Wicken batted first and made 177-9 off their 50 overs, Adam Wirth (56) and Ben Halleybone (54) both scoring half-centuries for the home side, Nicholas Wootton (45*) was also in the runs for the hosts. Brandon Holmes (3-45) was the pick of the Geddington bowlers with three wickets, there was also two wickets each for Lee Sutherland (2-20), Mark Pearson (2-30) and Marcus Knight (2-34).
In reply, Geddington were struggling at 73-6, before Sutherland and Pearson put on a match winning 101 partnership for the 7th wicket, Sutherland (62) top-scoring for the visitors with a half-century in a innings which included 11 fours and 1 six, Pearson (35*) finished unbeaten to guide the visitors to victory with 4.5 overs to spare. Wirth (3-40) was the pick of the Wicken bowlers with three wickets and there was also two for N Wootton (2-38) for the hosts.
Share via
FacebookTwitter
https://www.pitchero.com/clubs
Recent news